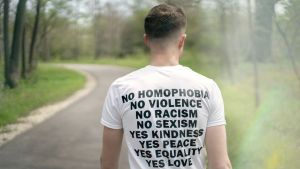 As we celebrate Pride month, the issue of mental health within the LGBTQ+ community needs to be highlighted.  Although much progress has been made, the strain of living in a society where oppression, discrimination and marginalisation are routinely encountered is a source of ongoing stress and anxiety for many people. Over 50% of LGBTQ+ people surveyed in 2018 reported that they had experienced anxiety or depression in the past 12 months.

In many areas of this country there is still ongoing social stigma for a person’s sexual or romantic orientation, gender identity or race. 67% of GBLTQI+ people surveyed said that they don’t feel like the belong in their community and that they’re often lonely. Discrimination and stigma can stop people from putting down roots and flourishing within communities. New research released found 79 per cent of Scottish LGBTQ+ youngsters aged between 11 to 18 had experienced suicidal thoughts or feelings, compared to just 36 per cent of their non-LGBT peers. Almost half of secondary school pupils in the UK say they have received little to zero positive messaging at school about being LGBT+ at all in the last 12 months and over 40% have felt unsafe at school during the last year.

In 2018 Theresa May made a commitment to end the practice of conversion therapy – sometimes called “reparative therapy” or “gay cure therapy” – which tries to change someone’s sexual orientation or gender identity. About 5% of people who responded to a 2018 LGBT government survey said they had been offered some form of conversion therapy, while 2% had undergone it. As of the time of publishing this article, this practice is still legal and still occurring our communities. The National Council for Hypnotherapy (NCH) recognises the harms of these practices and actively encourages diversity and tolerance within its membership.

Pride month is about communities coming together in celebration, protest, unity and solidarity.  Because Pride is usually celebrated with lots of parades and marches it’s easy to overlook the deeper messaging that runs underneath. Pride month is about teaching tolerance, education in pride history and continuing to move forward in equality. It calls for people to remember how damaging homophobia was and still can be.

Working with a trained and qualified hypnotherapist can help you move past unhelpful messages and beliefs and to find more ways of being and interacting in the world. When seeking therapy for issues related to sexual identity, it can be difficult to find a qualified mental health professional who has experience with, or understanding about, the challenges that their community faces.

The National Council for Hypnotherapy has a register of therapists who indicate their experience and willingness to delve into these aspects of self-identity.  Working with an experienced therapist can aid you in resolving mental health issues and past trauma enabling you to create a life that you feel comfortable in.

For more information, or to find a therapist that’s right for you, visit the NCH’s therapist finder.