School Refusal: What to do when your child refuses to go to school

Home News School Refusal: What to do when your child refuses to go to school
  
News 4th September, 2019 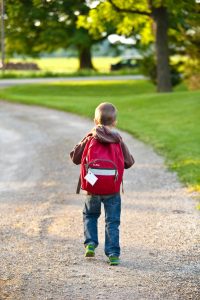 It’s not uncommon for a child to have a day when they simply don’t want to go to school.  They aren’t sick, aren’t being bullied or dislike school in any way, they just don’t want to go on that particular day.  Perhaps as preparations begin to go back to school in September there may be a bit of complaining that it’s not fair, that they don’t want to change their routine from the one they’ve adopted over the summer months. However, for some children the issue runs deeper than not wanting to give up their time playing in the park or watching videos and it can escalate into something the experts call ‘school refusal’.

Children and teens who start to show habitual patterns of avoiding going to school may be dealing with suspected or diagnosed special educational needs, anxiety, depression, family crises or other traumatic life events such as bullying. School refusal often peaks at times of transitions such as moving to a new school or beginning high school as these are periods of higher stress and upheaval than normal.

“While problems may be centred around school or home life, the end result is the same – children can’t cope and withdraw from school. They need the education system to recognise that anxiety that interferes with their day-to-day living is a debilitating mental health condition requiring support and reasonable adjustments” says Fran Morgan, an expert on school refusal and the founder of Square Peg.

So how do you support your child who is having difficulties attending school?  They are often highly anxious and need emotional support. It’s important to recognise that the child in question is not behaving wilfully, they are struggling with a set of circumstances that make their attendance more difficult than other children. One way of supporting your child who is experiencing significant anxiety about returning to school is to reach out to a professional therapist.  This can help them gain the support and skills that they need to successfully overcome their fears and learn coping skills.

Clinical hypnotherapy can be a successful way to deal with stress and anxiety, the National Council for Hypnotherapy (NCH) says that Hypnotherapy can help a child deal with the issues that they are facing helping a child move on with their school career without the potential harmful side effects of medication.

During hypnotherapy sessions the therapist can help the student set goals for how they would like to feel, identify the root causes and work with the student to create strategies for getting them back to school feeling calm and confident.

Many of the nearly 2,000 trained, insured and registered hypnotherapists on the NCH therapist finder specialise in working with children and adolescents.  You’re sure to find help close by.

Use the NCH directory to find a therapist near you.

School Refusal: What to do when your child refuses to go to school was last modified: February 13th, 2020 by NCH News
We use cookies to ensure that we give you the best experience on our website. We take your privacy very seriously too - click 'read more' for our privacy policyOkRead more