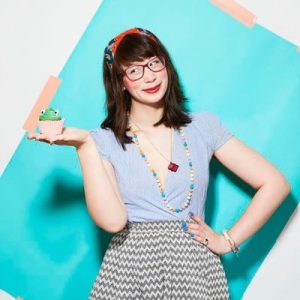 Last year social anxiety became a talking point thanks one of the fan favourites from last season’s Great British Bake Off. Kim-Joy was a constantly smiling, cutsey fashionista who was embraced by the British public thanks to her relentless positivity and genuineness. She was loved even more when she started to open up about how surprised she was by all the love and approval she was receiving.

“I always wanted to take part in Bake Off, but I was very nervous, not about the cooking, but how the other contestants would perceive me,” says the 28-year-old who lives near Leeds in an interview with a national paper.

Her contestant profile released to the media contains a quote reading “My friends have always wanted me to apply, but I didn’t feel confident enough to apply until this year”. When Kim-Joy was in school she struggled with selective mutism. She says she didn’t want people to know that she could talk.  This struggle with severe social anxiety lead her to study psychology at university and she ended up working in the NHS as a psychological wellbeing practitioner.

Kim-Joy is using her newly found fame to open up conversations about mental health and the NHS.  While she says that she loves the NHS she has come to realise that the clinical side of mental health isn’t for her.  Professionals need data so they can see who is recovering and she feels that a lot of people make up with answers because they want to sound like they’re feeling better.

Last year a study was released which showed that prescriptions for anti-depressants have almost tripled since 2000, with 64 million NHS prescriptions now doled out annually – compared with 22 million in 2000. UK levels of antidepressant use are now fourth highest among Western countries.

Talking therapies have been proven to help treat anxieties, stress and depression.  The National Council for Hypnotherapy(NCH) states that clinical hypnotherapy particularly can be of benefit when working with mental health conditions; helping to assess the issues and identifying their root – whether it is a situation, a physical issue, a past experience or a relationship.

Rather than using standardised forms and questionnaires, a clinical hypnotherapist can use a range of different interventions to help you resolve whatever the issue is that’s troubling you.

Working with a hypnotherapist may help you feel more confident and more at ease about things which have previously been challenging for you says the NCH.

“Hypnotherapy unlocks the potential you have to break free of negative thought patterns, and to react more positively and more confidently to situations in your life that may have previously made you anxious.”

To contact your nearest NCH-registered therapist and start the process of shedding your anxieties, simply click here.

Kim-Joy breaks free from social anxiety was last modified: September 24th, 2019 by NCH News
We use cookies to ensure that we give you the best experience on our website. We take your privacy very seriously too - click 'read more' for our privacy policyOkRead more